The WHS has converted the original town hall constructed in 1837 (which had long been used as a town garage and storage building) into a facility to house historical pieces donated by local citizens.  In its second year of existence the museum displays a late 19th century kitchen, parlor, and bedroom as well as an area for tools and equipment used in the various Washington industries from that period.  We continue to accept select items with a historical reference to the Town of Washington.

The name of the hall was “discovered” during the initial cleaning of the building when two of our members were pressure washing the walls. While the roof and walls were wet, the words “Razoville Hall” appeared on one of the header beams. It was determined then and there the museum should be named Razorville Hall. 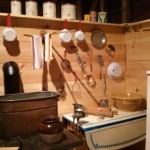 This corner of the kitchen displays pots and pans as well as various kitchen utensils and canister set. 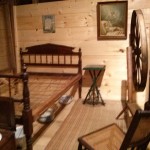 Our bedroom display includes a rope bed, spinning wheel from the early 1800’s and a hand-made plant stand. 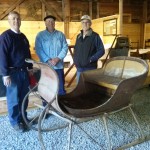 In this picture left to right:  Dan Hibbert, who donated the sleigh, Gene Hibbert and Rick Hibbert who helped their brother deliver the sleigh from CT.  They always knew the sleigh as belonging to their grandfather, Arthur Hibbert (b.1894, d.1980) who was raised in Washington but moved away as a young adult.  Arthur married Gertrude Mooney from P.E.I.  They kept the Hibbert home on Prescott Rd which some of the family still own and visit in the summer. The sleigh was made by Cooper Bros., W. Searsmont, most likely in the late 1800’s. 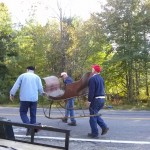 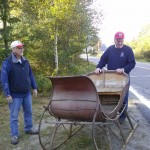 The sleigh returns to Washington!